In the past week, I ran a little experiment. I didn’t necessarily intend to, but it seemed like a good opportunity. I tried to engage three brands on Twitter. Only one responded, although late. So what does this say about all the consensus out there in social media marketing that Twitter is a great place to serve customers? Well, first, I think there are many brands out there that do a great job of engaging followers on Twitter. Hubspot wrote a great blog with some examples. The examples were wide ranging from consumer goods to a university to a research company.

My tweets to these brands were not negative or combative. I was trying to start a conversation. Maybe these brands don’t have a plan to respond or are too afraid. Here’s a look at my experiment.

I wrote a blog recently about a trip on Southwest that turned into a nightmare. I wanted them to read it. I posted it with a call out of their handle on January 9.

No response so I retweeted on January 12, calling them out for not using Twitter as a customer service channel. They replied, and we had a conversation via DM. I can report that I did receive a refund for the canceled flight, which was approximately what the rental car cost. But they did not make any attempt to further compensate me. They did apologize. I still am not overly impressed with their Twitter responsiveness, but it was better than the other two!

I don’t follow L’Oreal on Twitter, but I do use their products. Not really makeup, but shampoo, conditioner and hair styling products. A promoted tweet came up on my feed. Promoted means well they paid for it, and they must have the goal to increase followers. I didn’t think the tweet really answered what the value is for me to follow them, so I let them know this.

Again, not I’m not trying to drag them in any way. Just trying to start a conversation. Tell me why I should follow you, and be more specific than news and updates. They could have responded and shown how powerful social media can be but instead just crickets.

I love iced tea. It’s the most southern thing about me. I don’t have a brand preference for tea bags, buying typically what is on sale or what I have a coupon for, so I go back and forth between Lipton and Luzianne.

So I came to the end of a 24 count box of Luzianne, only to be left with only three tea bags instead of four. It takes four tea bags to make a gallon, thus I should be able to make six gallons. Yet, for the third time, I seem to have been missing a tea bag. So I though Luzianne should know. 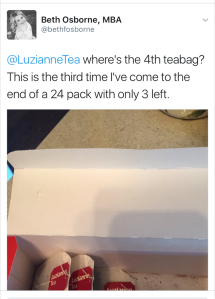 Luzianne did not respond at all. I am thinking maybe this is something they should look into – I could’ve provided where I purchased the boxes because obviously, they are only putting 23 in there! No response to me means they either don’t care, aren’t aware or don’t know how to respond – which are all extremely concerning. So Luzianne, I can’t buy your teabags anymore.

I’d love to hear what you think about these Twitter fails. Tweet me, and let’s have a conversation!