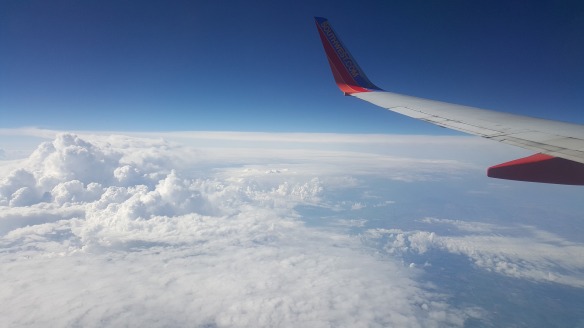 From the So This Happened Files

Of course we have lots of stories. And our honeymoon was full of wonderful moments until the end. Everyone has survived some sort of travel nightmare. This is ours; it’s based on a true story. And maybe in a few years we can look back and laugh. Who knew it would take over 24 hours to get home from Jamaica. And no boats were involved.

We chose to fly Southwest. I’ve been a raving fan of theirs for many years. I studied them in business school as a company built on values and taking care of employees and customers. I really thought they were different. I didn’t really start flying Southwest until a few years ago when they finally arrived at the Charlotte airport after their acquisition of AirTran. I liked what I believed them to be as a company. And their flight attendants always seemed to be genuine and happy, unlike other airlines, where I thought the people might jump off the plane at any moment.

I understand that flights get canceled. I was a constant traveler for five and a half years. I get it. I know weather can’t be controlled. But this experience was the absolute worst I’ve ever been involved regarding a canceled flight. We arrived from Jamaica to Baltimore. Our flight to Charlotte was scheduled for 8:40 p.m. We get through customs, and the flight is on time. Then it was delayed two hours. Okay, we can deal with that. Lots of delays and canceled flights light up the screen. Then we are delayed another hour – waiting for the aircraft. Our plan arrives, and we are advised that after the passengers deplane, we will be on our way.

But we aren’t. The new message is that we need a first officer. Again, I understand that pilots can only fly a certain number of hours and that all commercial flights require two pilots. But they board us anyway. We’re on the plane. It’s now midnight. The first officer has landed in the B gates, and he’s on his way to our gate in A. Passengers are getting restless and start saying that we’re not going anywhere; that this is all a lie. And they are right. The next announcement is that there is no first officer; the flight has been canceled. I can only assume that the first officer fell into a black hole on his way to the gate. Someone should really report him missing.

After the cancellation, we are given no further instruction on how to get our bags or what to do. There’s one service desk and 100 plus angry and tired people. All the flights for Sunday are booked. Justin suggests we can just live in the airport like Tom Hanks did (and I’m not laughing). But we’ve got to get home. The dogs need to be picked up in the morning. We are six and a half hours from home. We can drive. The car rental is 24 hours at BWI. But we need our luggage. We ask how to find our checked baggage. “Just go to baggage claim,” we are instructed. Baggage claim is a nightmare. Our bags are nowhere to be found. Then we are advised that our baggage is in a “secure area.” We have to get in another line. While in said line, Justin keeps looking around. The luggage is found. It’s about 1:30 a.m. at this point.

We go to pick up the rental car, but I don’t have my driver’s license. I only have my Passport. I try to keep what I have to take with me minimal when traveling, but note to self – take your damn license! Justin has his license but no credit card. I have credit cards. Hertz says no – driver and credit card have to be the same. Not sure why – and we are married. Avis accepts his license and my credit card. We get on the road. It’s 2:30 a.m.

We make our way through D.C. in the middle of the night. There’s still a surprising amount of traffic. However, I’ve come to believe that D.C. has traffic no matter what time of day. We’ve now been up for 20 plus hours.

So we stop at rest stops all down 95, and run around the car to stay awake. He gets coffee; I have soda. He won’t let me drive because he’s a good husband (and is also aware that I’m not the best driver under ideal circumstances). But I have to stay up. So I plug in my iPod and start singing loud. We stay awake. I may have been holding my eyelids open. I think I was a bit delirious at this point as well. It’s kind of a blur.

Around 10:00 a.m., we roll into Charlotte. We’ve been up for close to 30 hours. It has taken us 24 hours to get from the resort to home (and again, we didn’t take a raft from Jamaica). We pick up the pups, who are very glad to see us and smell so nice from their go-home baths. Finally, at around noon, we collapse into bed.

But we survived; our first test of the marriage. And as for Southwest, I feel very different about them now than I did before. They are going to issue us a partial refund for the canceled flight. But now I just think they are like all the rest. There is no differentiation between them and the others. I’m not sure when I’ll fly them again. Our trips for 2017 will be mostly through American, as they own about 90% of our airport and I’m a card member. Listen, I have no love for American. But now I think Southwest is on the same level. They’ve lost my trust. I’m no longer a raving fan. It wasn’t the cancelation; it was the lying. I’ve never been able to take lying. Passengers don’t want smoke blown up our asses; we want the truth so we can make more informed decisions.

But as Justin said, we have a story. Yes, we do. Thanks, Southwest, I needed more material.

2 thoughts on “At least we have a story (Thanks Southwest)”