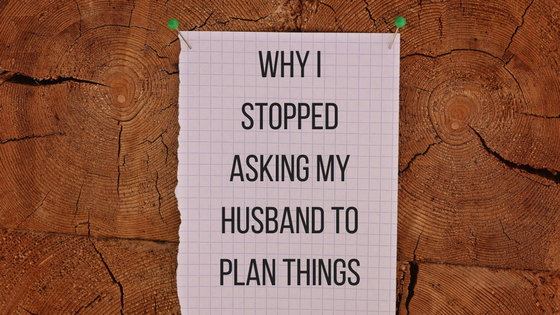 First, I’d like say that my husband is basically a saint. Sometimes, I can be a bit out of handful so he deserves a lot of credit. And he has many wonderful qualities. He is kind and patient. Rarely is he ever in bad mood. He’s great at accepting things or people as they are. His honesty and integrity are something I’d never question. But he’s not a planner.

Most men aren’t the planners. Women are typically the ones that plan events, vacations and celebrations. Maybe it’s in our DNA. Maybe we’re just better at the details. Yet, most of us still long for our partners to surprise us with something they’ve planned. And then, we get disappointed when it doesn’t happen. That disappointment feeds a cycle of negative thinking. We think we aren’t loved or appreciated. We feel as though it’s our own fault.

The truth is that many men were never really taught how to be planners. This may be because their mothers did everything for them (as someone who was once married to a momma’s boy, I can attest to this truth), or they just didn’t have a role model who expressed this characteristic.

Communicating what you need is okay. Just don’t expect anything to change. I’ve communicated to my husband on several occasions that I wanted him to plan something. He has tried with limited success. I asked him to plan dinner for my birthday this year. I reminded him several times in the weeks before. He’s well aware of what I eat and what I don’t, considering we eat most meals together. So a few days before my birthday, I asked where we were going. He made a reservation at a steakhouse. I don’t eat red meat. Even worse, it was a chain. And I hate chain restaurants, even the fancy ones. My response to his choice was that it sounded more like somewhere he’d want to go. So he cancelled the reservations, and I made a new one at an Italian eatery. The moral of the story is either I should just make the plans myself or be very specific in my requests.

But I don’t think I’m going to ask him to plan anything, maybe not ever again. I don’t want him to feel pressured or stressed that I’m not going to be satisfied. I am rather picky about a lot of things. I don’t think I’m necessarily hard to please, but my standards are high. And he meets my standards in most every other way. So instead of feeling disappointed when he doesn’t deliver what I want, I’ll just take on the planning myself. It stops the cycle of disappointment and hurt feelings.

I accept him as he is, and he’s a man who can’t plan. I extensively plan our trips with spreadsheets. I’m not a complete a**hole or anything. I just like to be detailed about what to expect and how we want to spend our time. I didn’t print out detailed agendas for our European trip this year. I called it a “loose” itinerary. I did ask for his feedback and made sure we visited places of interest to him.

I believe that most of the time, we make decisions together. We’re a team. Some things he is better at – cooking, home improvement and basically anything involving a tool. I’m better at managing the finances, grocery shopping and planning. We can only hope that when we find love, we bring to the relationship our abilities and that there is a balance. We absolutely balance each other out in most every way.

So to every woman out there who wishes their partner would plan some magical weekend away or other fairy tale, stop driving yourself crazy. It’s probably never going to happen. If it actually does, it won’t be like the movies. It will not be perfect. Accept your mate as he is; don’t put any pressure on the relationship for misconceptions about what a man or a woman should do. Just let it go. If you want to do something, plan it yourself. It will lead to many more happy years as opposed to building resentments.