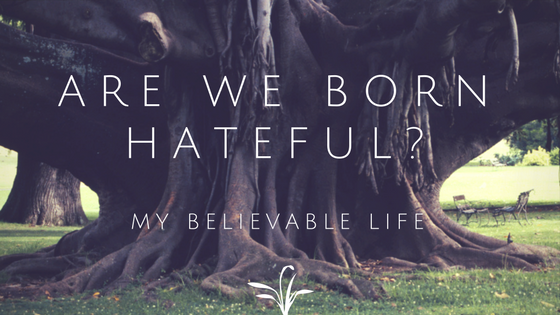 My husband, who often likes to buck the consensus, started a conversation with me recently about hate, and if it was learned or if humans are somewhat inclined toward hate at birth. I immediately answered that it’s learned. He rebutted my ease at the answer with thoughts of how animals, and even humans, must fight to survive in many circumstances.  And that even if it’s not hate that spurs us to save ourselves first, there is this innate sense for self preservation

Nelson Mandela had an important opinion on this, stating, “No one is born hating another person because of the color of his skin, or his background, or his religion.” We tend to believe that we are born true of heart, and that hatred, whether it be based on race, religion, gender or any other element is learned. However, I don’t think everyone is taught to hate; sometimes it may be a consequence of sameness.

Looking at my own history and experiences, it would have been easy for me to be hateful and fearful of anything different. I grew up in a rural North Carolina town full of white faces. I never went to school with anyone who wasn’t white until college. In my first 18 years of life, I was surrounded by lower to middle class white Christians. I never met a Jewish person or Muslim person until college. It was by all accounts, a sheltered life. The only thing that made it different was my mother, who engrained in me that people aren’t skin colors or genders or religions. People are the product of their choices, their passions, their actions and their words.

This segregated world I grew up in isn’t from the 70s or 89s but actually the 1990s. There were people of other races in my town, black and also a growing Hispanic population, due to the apple orchards, Christmas tree farms and chicken manufacturing plant. My best friend went to another high school where things were more diverse. And on more than one occasion, girls were transferred from her high school to mine by their families because of their romances with young black men.

My mother may have been inclusive; however, my absent father still said the “n word.” My grandmother whispered the term, “black.” She was not in any way racist, but a product of her environment and life. Thus, in my sea of sameness, I did encounter different thought patterns that ultimately led me to discern what the differences were in each of us, and if they really did matter.

I know I wasn’t born hateful. But I’m not so sure there’s not some truth to my husband’s theory. Are we really pure at birth? Don’t we come with some pre-programming? Babies are born with fear, or at least two specific fears, that of falling and loud noises. They are part of our DNA, in response to the need to survive.

Interestingly, hate is often born from fear. Not understanding or not experiencing anything outside of our comfort bubble may make us more inclined to hate. Is it because we are bad people? Or simply the way in which we perceive safety?

There has been substantial research on the subject with no real clarity. Are these studies biased from the start? I’m not a scientist. My understanding of the human condition is based on my experiences. And those experiences took me out of that small town to other states, cities, countries and continents. My perspective is also tempered by loss. When your entire immediate family is gone by the time you are 20, your identity becomes a bit unstable. Differences, especially physical ones, have no real meaning. Maybe my compassion is greater or my tolerance for ignorance lower.

As I look at the world now, there’s so much conversation of them versus us. Who has the right to be here? Who has the right to marry? And will what is happening now change us? Transform our DNA to be born with more fears in order to survive? Time will only tell if the human race chooses to celebrate diversity or uniformity. Let us please find a way to love the differences.

1 thought on “Are We Born Hateful?”