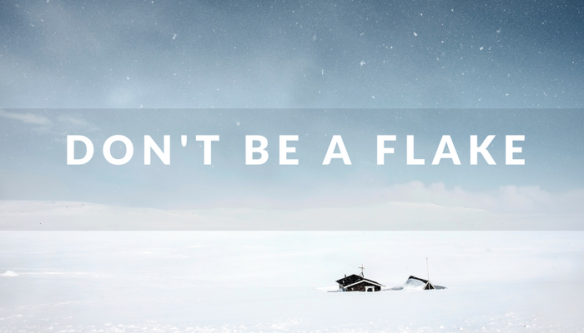 No one wants to be a flake. We all like to think we are accountable, decent human beings. But there’s still an unfortunate amount of flakiness out there. If you are wondering if you are a flake then you probably are. Don’t despair; this isn’t a condemnation. You can get those ducks in a row or at least in the same pond. Here are three lessons to start.

When I say show up, I don’t mean just physically being there but being present. But first we will start with actually being there. I have a full calendar most days. I have meetings and conference calls for my day job but also lots of calls or meetings for freelance work, and I can say from experience that people don’t show up. Even for interviews! A little over a year ago, I scheduled an interview with a hiring manager, which included me taking time off from my current job. The lady never called me. It was supposedly an issue with not having the correct bridge line. So I was okay with rescheduling. The call was rescheduled for a day in which I was on vacation on the west coast, but I still accepted the meeting. I got up way early, as it was a 9 a.m. start time, but I was on Pacific time. And once again, the lady did not show up! At this point, I was done. I had no interest in working for someone who thought so little of my time. It was rescheduled again, and trying to be the better person, I accepted. When I finally had the call, the person never apologized or even mentioned the previous mishaps. She could have offered me a golden throne to rule from, and I would have said no.

The second part of showing up is being present. I’ve been in many meetings where most everyone in the room was on their phone, not remotely paying attention. I do not take my phone out during meetings. It’s rude and sets the tone that you don’t care. And it’s even worse in virtual meetings! People are on their phones, replying to IMs and checking email. That’s why you have to repeat your question twice (it’s not because they were talking on mute, but that’s a typical excuse).

I was working on a project early last year, and I had offered to help a colleague with some of the project management. She arranged a call, and I accepted. During the entire call, she kept pausing saying she had to answer an IM; then she’d say, “Sorry, I’m being so rude.” I didn’t respond. I would have preferred to say, “Yes you are.” I was offering to help her, and she couldn’t give me 15 minutes to understand her needs.

Showing up and being present matters professionally and personally. My husband and I don’t bring our phones to the dinner table, and you’d never catch us at a restaurant glued to our phones. We actually like talking to each other.

Deadline literally means “the latest date or time by which something should be completed.” Most everyone has to deal with deadlines at work and home. Yet no one seems to be able to meet said deadline. My first job after undergrad was in a legal department. Our deadlines were pretty firm, unless the court granted an extension. If you don’t submit your response to a complaint on time, that’s it. No do-overs. You lose. Because of this experience, I have a unique perspective on deadlines. I hold myself accountable and deliver in the time frame promised or given. But there is rampant disregard for deadlines in corporate America. The justification is always that he or she is slammed or too busy. To which I say, “Do your job.” Everybody’s busy; everybody, however, doesn’t know how to prioritize or manage their time. There are plenty of guides, articles and other content available to help people learn to do this so if this an area where you suffer, get some help. Also stop procrastinating. Make lists. Set reminders.

Indecision gives me literal heartburn. If you can’t make decisions and stick with them, we aren’t going to be friends. I make decisions, not with haste, but I also have the ability to think critically about the consequences of decisions. I do not waffle. Every decision I make doesn’t always turn out as expected, but I learn from it and move on. I proudly own my decisions. But, I am significantly frustrated with the way in which I’ve seen people, who were in positions where being decisive was essential, unable to do this.

Great leaders make decisions with confidence. They carefully think through how the decision will impact the process, product or strategy. When I see leaders unwilling to make decisions, it’s usually because of fear. Fear is the biggest hurdle to execution. Fear keeps people staring into the headlights. I once had a boss that was paralyzed by fear, fear of one little word on a landing page or eBook. His fear strangled my ability to execute and ultimately led to me leaving.

I will admit there is one caveat to my strong decisiveness – sushi menus. They are so long and overwhelming! I defer to the hubby whenever we have sushi. It keeps me sane.

If some of these examples seemed a little too familiar, it’s okay. Most have no intention of being a flake. Often you need to become self-aware to be accountable. But accountability isn’t selective. You can’t just be responsible when things are good; you also have to be responsible when things aren’t so good. Take a deep breath, and decide to shed the flakiness today!