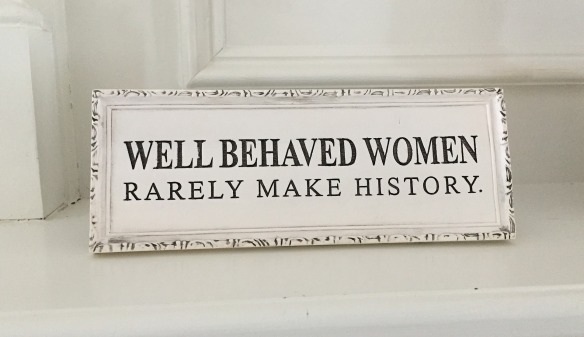 Being a woman is different than being a man. Even in such a civilized and progressive country as ours. I had to pause for a moment after typing those words because these days I’m not sure how civilized or progressive we are. But this world is different for a woman; I don’t have every option that a man does. Everyone women knows this to be true. This is a reminder for all men.

Women, in this country and most others, are too often defined by their relationship to men. Women have prominence or celebrity because they are someone’s wife. After all, a billion dollar franchise was created on this notion yet many of the stars of this show aren’t even housewives.

If we are not defined as a wife then we are praised or shamed based on our ability to be a mother. The president of Turkey recently said women are deficient if they don’t have children. Great to know so much progress has been made. When you really consider where we are, at least in the U.S., remember it’s not been that long since we couldn’t vote, own property, get jobs outside of female professions or have an opinion.

I was lucky in that being raised by a fierce, independent single mom, she never mentioned that my gender would somehow hold me back. Maybe this gave me a false sense that anything was possible. Maybe I should have been prepared a bit more. Ultimately, I think she was aware of the still present barriers for women; she just didn’t want me to see them.

I never noticed the differences while pursing my education. I never saw favoritism toward males, and I had many female professors. Things got more noticeable when I entered the working world. I have not had many female managers. Unfortunately, the one female boss I had until now was no role model. She was the stereotypical female; almost a caricature of the role, something you’d see in a bad rom-com. She was arrogant, petty and jealous. She had no desire to develop the talented women that worked for her. She only wanted to keep us in our place and take any opportunity she had to humiliate us. Years later, I had the opportunity to manage several women. I can certainly say I had a different approach. I worked hard to coach them up and let them know they could trust me. I’m still not impressed by the number of female leaders in business. I’m in an industry (marketing) that seems to skew somewhat female, but there still aren’t that many female CMOs (Chief Marketing Officers).

And while we are on the topic of career opportunities, the pay gap is still a real thing. Men are considered the breadwinners who need to support their families. So does that mean women just work for fun? And we don’t need the money? I’ve seen men get raises because they had a child on the way. I’m not saying that those men weren’t deserving of a raise, but the reasoning isn’t fair. Your salary should be based on your skills, education, experience and what you produce. The mentality has to change. Women should have the opportunity to earn the same salary and seek the highest position. I have worked with a lot of great women who were great leaders. They just weren’t given the opportunity.

This cycle of inequality is not just because of our patriarchal society. Women are the problem, too, as I’ve described above. Women believe they are second class citizens. They don’t want to be seen as emotional or too aggressive. Women are constantly reining it in so as to not seem too intense. I want to see women working together to lead, not tearing each other down or feeling threatened. I have no idea how to solve the disparity. I can only say that I support other women and celebrate their successes. I’m also not afraid to call any man out who is being misogynistic.

What I hold on to is the example set by my mother and grandmother. I grew up believing I could be anything with no thoughts of a glass ceiling. The ceiling for now has been raised but not shattered. It’s there every time a female leader is criticized for being a woman or when a women is asked about her appearance rather than her ideas. That ceiling is still visible every time a woman is identified as the wife of even when she has her own identity or every time a woman is paid less than her male counterpart.

I’m glad to be a woman. I have no desire to walk in the shoes or the shadow of a man. I know in this country I’m, at least for appearances sake, on the same level as men. There are many women in the world who have to deal with all kinds of atrocities simply because of their gender. My great hope is that eventually there is no hesitation when a woman assumes leadership or speaks her mind; that we are simply considered based on our abilities and that gender isn’t part of the conversation.

2 thoughts on “The World is Different for Women”